End of the Realms

Credit: see original file. Suggest as cover photo Would you like to suggest this photo as the cover photo for this article? Yes, this would make a good choice No, never mind. Thank you for helping! Thanks for reporting this video! Oh no, there's been an error Please help us solve this error by emailing us at support wikiwand.

Thank you! Audible wants to give you the most complete selection we can and we'll keep adding series and filling in gaps as quickly as possible. Myrmeen looked up and saw she was an adult dressed in silver armor with a phoenix headdress. One of the Harpers a secret organization fighting for good searches the jungle for a missing explorer and happens on a lost civilization--complete with dinosaurs--and the evil Cult of Frost, which tries to steal his magic ring.

By the author of Kindred Spirits. An intense, personal story of survival, a departure from the more sweeping "battle against great evil" tales that characterize the rest of the Harpers books. Journeying far north in defiance of her Harper superiors, Martine of Sembia finds herself trapped in the lonely, snowbound valley of Samek. The bards of Waterdeep remember the past. Or do they? Even as they sing their ballads, a mysterious spell is changing their memories. Danilo Thann, Harper and would-be bard, sets out to uncover the mystery.

In this quest, his closest companion is his deadliest enemy, the rogue elf Elaith Craulnober. At stake is not merely the future of Faern but also its past. Adventurer on the Run! Once Shandril was a humble kitchen maid. Now she's one of the most powerful magic-users in the land. And a lot of people want her dead.

The evil Zhentarim, the powerful Cult of the Dragon—all of them want her spellfire, and they'll kill whoever they must to get it. There's only one thing for Shandril to do: run. With the aid of Elminster of Shadowdale, the Knights of Myth Drannor, her lover, and a determined dwarf, she'll wield her magic for the cause of good.

When her hometown is overtaken by the Night Masks crime syndicate, Alias joins forces with the saurial paladin Dragonbait and the halfling bard Olive Ruskettle in a quest to free the town merchants from their underground overlords. Mari Al'Marin and Caledan, the unlikely pair of heroes from The Crypt of the Shadowking, return to match wits against the revived legacy of the Shadowking, which threatens all of Faerun. The Bedine witch Ruha has left the parched sea of Anauroch on her quest to become a Harper.


That quest takes her to Eversult, where she must prove herself by discovering who has poisoned Lady Yanseldara. Simple enough.

Find the poison and track the poisoner. Simple until the Cult of the Dragon, a Shou Prince, an oriental merchant, and an ancient dracolich get involved. Arilyn Moonblade has always feared the elfshadow, the essence of her sword's magic. When she learns the terrible truth behind her inherited moonblade, she vows to find a way to escape her fate.

What begins as a means to an end becomes a deeply personal commitment. Determined to succeed in her quest, Arilyn will risk all she holds dear. Strange magic is on the loose in Firefall Keep - magic that kills. The mightiest War Wizards are baffled, and the shadow of destruction threatens valiant Harpers and nobles of the fair realm of Cormyr alike. With Harpers in jeopardy, it is up to the legendary Bard of Shadowdale, Storm Silverhand, to overcome this lethal and mysterious force. 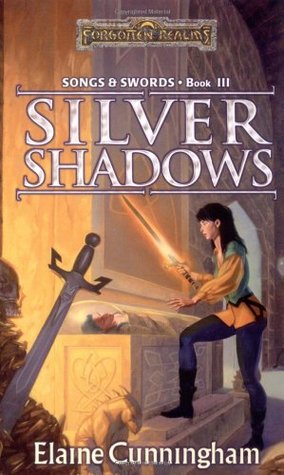 It's time to save the world again. When Joel became a priest of the new god Finder, he knew it meant forfeiting the honor and security of his position as a master bard. Now his freedom and his very life are at stake as powers of evil embroil the priests of Finder in a struggle against a plot to resurrect the dead god Bane.